If you’ve been following our content for a while, you’re probably aware of the well-known conditions that we deal with at Specialised Health. Musculoskeletal, cancer, mental health, and chronic fatigue are all big on our case list.

But you may not be aware of some of the lesser-known conditions that exercise can help with. The scope of exercise physiology is so broad that we would hazard a guess that you’ve probably never even heard of some of them before! Don’t worry –  even we occasionally come across conditions that make us scratch our chins and ask “What is THAT??!”

The truth is that exercise can be applied as a form of therapy for so many different health conditions. As the saying goes amongst us in this profession, ‘exercise is medicine.’

We are fortunate at Specialised Health that we get to deal with a diverse range of health conditions from insurers who are clued up on what we can offer for those ‘out of the box’ referrals.

So we thought we would take you on a journey to explore some of the less common conditions that we have dealt with over the past few years at Specialised Health! 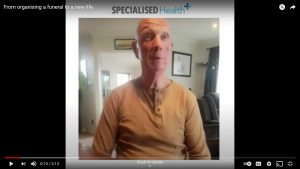 Check out the video here!

Remember Darren’s story at the end of last year?

Darren met Carmyn after gastric bypass surgery in April 2018 went horribly wrong. Complications and infections meant that he went from 167kg to a frighteningly frail 48kg. Darren was on death’s door – spending 8 months bedridden, even writing his will and planning his funeral in the hospital! To return to simple, everyday activities like going for a walk, driving a car, and playing with his grandchildren were things that he never thought he would be able to do again.

Receiving Exercise Physiology support at this time was life changing. For Darren, a structured exercise plan that was tailored to his capacity – limited as it was – meant that he could start building back his strength, endurance, and (just as importantly!), his confidence.

An Exercise Physiologist is probably not the first person you think of when you hear the words ‘gastric bypass surgery gone wrong’… But you can bet Darren is glad that his insurer did!!

Heard of that one before? Any guesses what it is?!

Chiari malformation (type 1) involves a deformation of the skull or a skull that is too small, putting pressure on the brain tissue inside. This may force the lower part of the brain downwards into the spinal canal, influencing the normal circulation of fluid around the brain and spinal cord.

This client was experiencing both neurological and muscular complications. Poor muscular endurance through his posterior chain (i.e. back and shoulders) resulted in muscle tension and tightness through the shoulders, and neural symptoms down his arms. Physical and cognitive fatigue impacted him to a level that it was unsafe to drive due to risk of falling asleep at the wheel!

Can exercise change the malformation? Probably not, no. But exercise did help with strengthening those muscles around the back and shoulders to improve posture, and reduce the muscular fatigue occurring. Muscle release work reduced the tightness, addressing the neurological symptoms too. And an incremental increase in exercise volume meant that as his physical capacity improved, his fatigue decreased. This made living with and managing his condition a lot easier!

CMV stands for Cytomegalovirus. Sounds pretty scary, but the virus is in itself, quite common and generally mild. Many people may carry it without even knowing – it can remain dormant in the system without showing any symptoms!

In some cases however, such as for this particular individual, the virus had a significant secondary implication – Hepatitis, inflammation of the liver. The liver plays a role in metabolism, filtering toxins from the body, bile production, and the creation of components of our blood. It’s no surprise that it knocked him for six!

Most limiting were his symptoms of physical and cognitive fatigue, and the exacerbation of his existing mental health condition. Poor physical capacity and the need for daytime naps meant that returning to work in the building industry was out of the question, for the time being anyway. The E.P. program followed a fatigue management approach – using an activity diary to educate him about his boom and bust patterns, and the gradual introduction of physical activity to build both endurance and strength for a return to work. (This program is still ongoing, so stay tuned for the outcomes!)

All 3 case studies are very different, and yet it is clear that exercise conditioning had a huge role to play in each. Are there any unusual cases on your case list that you haven’t considered before as a possible candidate for Exercise Physiology?

Have you got a claimant that would benefit from E.P. support? Refer to the team!