Education about the importance of exercise is one of the most valuable offerings that we have for our clients.

It’s probably also one of the most overlooked components when patients are discharged from acute-stage treatment and left to self-manage their own condition – as was the case in this kidney cancer case study. (Yet another reason that Exercise Physiologists should be better integrated into standard medical care, but that is a topic for another day…)

Let us diverge for a moment for some clinical chat… A nephrectomy involves the removal of all or part of a kidney, in Stuart’s case to treat his kidney cancer. The kidneys are hugely important for filtering toxins and waste products from the blood, balancing electrolytes, and regulating fluid levels in the body. This is done via the production of urine, and blood continuously moves through the kidneys to allow this to occur.

The kidneys have to deal with a huge amount of blood flow moving through them – around 200 litres every day! While the kidneys play a part in blood pressure regulation, they are also very vulnerable to the effects of high blood pressure. Damaged kidneys, or having parts (or all) of the kidney removed increases the risk of damage due to chronic or intermittent increases in blood pressure. 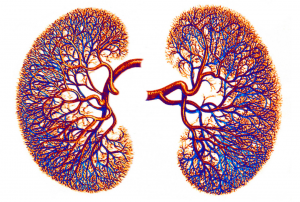 Given this knowledge, the advice received by Stuart from his oncologist cautioning him against strenuous physical activity – which would elevate his blood pressure – was warranted. But how can anyone be expected to determine what is classified as ‘strenuous’ physical activity if no clear guidelines are provided? With ambiguous warnings comes uncertainty and health anxiety. The unintended side effect of his oncologist’s warning was that it created enough fear in Stuart’s mind that he actively avoided any and all physically demanding tasks.

Unfortunately for Stuart, inactivity resulted in deconditioning. Previously working within an active role as a furniture assembler, Stuart started to notice his previously limiting knee pain increasing in severity. Quality of life was on the decline, as anxiety around his health increased. These physical and psychological symptoms further reinforced his movement avoidance.

Then Along Came Aidan…

When Aidan stepped in, goal number 1 was education. Aidan knew that what Stuart needed most was to get moving again! Keeping the consideration of blood pressure top of mind, Aidan designed a strength-based exercise program that would be safe for Stuart to complete, while also addressing his deconditioned knee.

Through this, Stuart was able to learn his safe exercise limits, build self-efficacy in regards to movement, and regain his confidence in his health. He reported that being able to exercise made him feel “normal” again, and his questionnaire results demonstrated the significant improvement in quality of life that accompanied this!

At the completion of the program, he had regained the confidence to exercise independently. He also managed a full-time return to work in a new career!

Without Aidan’s input at the time of this program, the well-intentioned yet ambiguous advice given by his oncologist had the potential to lead to a whole host of future health problems due to his avoidance of exercise. Cardiovascular disease, obesity, diabetes, increased pain, and not to mention an increased risk of cancer recurrence.

As health professionals, we need to be aware of the real-life impact that our words, or lack of, have on our client’s behaviours.

Have you got a claimant that would benefit from E.P. support? Refer to the team!